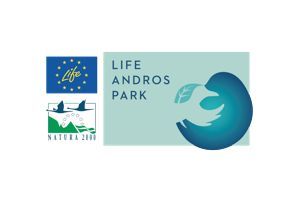 The project is being implemented by the Agricultural University of Athens in collaboration with Hellenic Agricultural Organization – Demeter, Fundación CBD para la conservación de la Biodiversidad y su Habitat, Kaireios Library, Municipality of Andros, MOm/ Hellenic Society for the Study and Protection of the Monk Seal and Nature Conservation Consultants (NCC) Ltd with the financial support of the European Union for the period 01/09/2017 – 30/09/2021.

Building on top of the results and achievements of the ANDROSSPA project, the LIFE Andros Park project expands the nature conservation activities from birds and Andros SPA site to entire Andros Natura 2000 network, which apart from the SPA also includes a Special area of Conservation (SAC), as well as, to its priority species i.e. Mediterranean Monk Seal and to its priority habitat alluvial forests with Alnus glutinosa and Fraxinus excelsior (91E0*). The ultimate vision of the all these efforts is to establish holistic management of Andros Natura 2000 sites with the support and active involvement of the local community and key stakeholders.

The overall project objective is to implement priority conservation and restoration actions to significantly restore and improve the conservation status of the Annex I 92/43/EEC priority terrestrial habitat alluvial forests with Alnus glutinosa and Fraxinus excelsior (91E0*), as well as the priority marine species Mediterranean Monk Seal, Mediterranean Shag and Audouin’s Gull within the Natura 2000 sites of Andros island (GR4220001 and GR4220028). This objective will be achieved by implementation of a series of conservation measures at sea and on land by active involvement of local stakeholder and volunteers in planning and implementation of the project interventions: